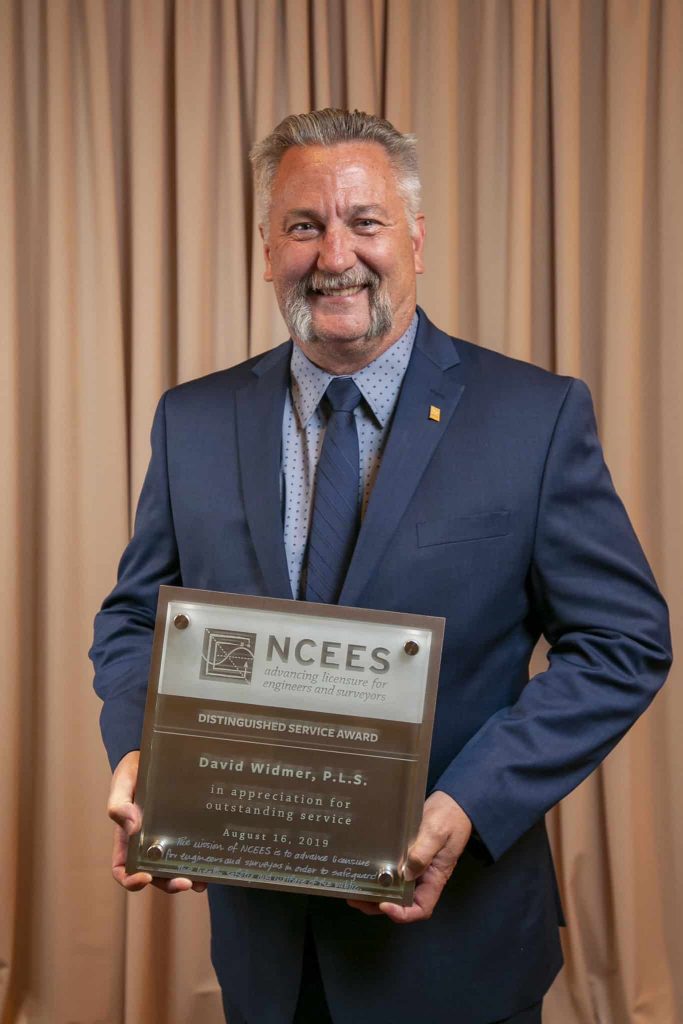 David Widmer, P.L.S., of Rochester, Pennsylvania, has been awarded the NCEES Distinguished Service Award for his dedicated service to NCEES and the engineering and surveying professions. Widmer received this award at the organization’s 98th annual meeting, held August 14–17, 2019, in Washington, D.C.

Widmer began his service to NCEES in 1992 when he joined the Committee on Land Surveying. Since that time, he has served as a member or board of directors liaison to almost every NCEES standing committee as well as several task forces. He most recently served as a member of the 2018–19 Advisory Committee on Council Activities. Widmer was a member of the NCEES board of directors from 2009 to 2016, when he served terms as president, treasurer, and Northeast Zone vice president.

During his presidency in 2014–15, Widmer established a task force on the future of surveying to increase the number of professional surveyors and improve license mobility for the profession. He also focused on facilitating multistate licensure, including improving the uniformity of continuing education requirements among U.S. jurisdictions and the development of the NCEES Continuing Professional Competency Registry.

Widmer was a member of the Pennsylvania State Registration Board for Professional Engineers, Land Surveyors, and Geologists from 1992 to 2011. During this time, he served as board president and vice president. He represented the board as an ABET observer at Pennsylvania universities. He assisted with writing several regulation changes for the commonwealth, including drafting language for continuing education requirements for the professions. He is now an emeritus member of the board.

From 2016 to 2019, Widmer served as a governor of the American Society of Civil Engineers’ Utility Engineering and Surveying Institute. In this role, he spoke about licensure and the role of professional surveyors in civil works projects.

The National Council of Examiners for Engineering and Surveying is a nonprofit organization made up of engineering and surveying licensing boards from all U.S. states, the District of Columbia, Guam, Puerto Rico, the Northern Mariana Islands, and the U.S. Virgin Islands. Since its founding in 1920, NCEES has been committed to advancing licensure for engineers and surveyors in order to safeguard the health, safety, and welfare of the U.S. public.

NCEES helps its member licensing boards carry out their duties to regulate the professions of engineering and surveying. It develops bestpractice models for state licensure laws and regulations and promotes uniformity among the states. It develops and administers the exams used for engineering and surveying licensure throughout the country. It also provides services to help licensed engineers and surveyors practice their professions in other U.S. states and territories. For more information, please visit ncees.org.